To find the monument, go west on Old Tappan Rd from Main St and look for the historical marker on the corner of Andre Hill Rd. Turn left and proceed to the monument which is in a traffic island in the middle of Andre Hill Road, in a residential area near #31. The site is enclosed by a wrought iron fence.

Andre's body was buried here at the site of his execution. In 1821 he was exhumed, loaded aboard a British warship on the Hudson, and brought to England for permanent burial in Westminster Abbey. 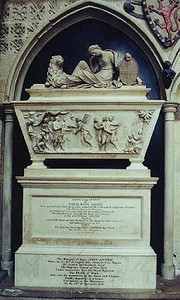 Andre's permanent tomb and monument at Westminster Abbey in London, England. The monument was erected in 1782, and the inscription reads:
"Sacred to the memory of MAJOR JOHN ANDRE,
who, raised by his Merit, at an early Period of his Life, to the Rank of
Adjutant-General of the British Forces In America,
and, employed in an important but hazardous Enterprise,
Fell a Sacrifice to his Zeal for his King and Country,
on the 2nd of October, 1780, aged 29, Universally beloved and esteemed by the Army in which he served, and lamented even
by his Foes. His gracious Sovereign King George III
has caused this Monument to be erected."

And on the base, after his remains were reinterred in a grave contiguous to the monument:
"The remains of Major JOHN ANDRE were, on the 10th of August, 1821, removed from Tappan by JAMES BUCHANAN, Esq., his Majesty's Consul at New York, under instructions from his Royal Highness the DUKE OF YORK, and, with the permission of the Dean and Chapter, finally deposited in a grave contiguous to this monument on the 28th of November, 1821."