off Senneville Rd, Senneville, QC on the point of land north of the Rt 40 bridge

When Benedict Arnold, commanding at Montreal, heard that the British had captured an American army unit at the Cedars, he immediately went in pursuit. Upon reaching the western end of Montreal island, he received a false report that the enemy was moving toward him in force. He stopped and dug in at the old French Fort Senneville. Once he learned the truth, he resumed his pursuit, and was able to recover the prisoners. Later in the action, he ordered the old fort burned to deny it to the enemy.

The ruins of Fort Senneville are on private land, not visible from the public street. They have been maintained for many years by the families which own the land, but there are efforts being made today to encourage the government to step in and create a historic site.

Click this link to see the official webpage of the site: http://www.historicplaces.ca/fr/rep-reg/place-lieu.aspx?id=13246&pid=2604&h=Benedict,Arnold
Read More 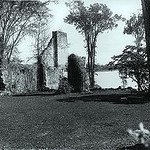