Albany Rural Cemetery, 48 Cemetery Av, Menands, NY (next to Albany) The cemetery says his grave is in Section 55, Lot 1, but I found it in what seemed to me to be Section 53.

Col. Peter Gansevoort was in command of the Mohawk Valley when Col. Barry St. Leger began his invasion from the west. Gansevoort and his men did what they could to strengthen the run-down fort, then made a heroic three-week stand against the British siege of the fort. Benedict Arnold marched to their aid, and through subterfuge, caused the siege to be lifted just prior to his arrival. Gansevoort became renowned for his determination in holding the fort with his 700 men against St. Leger's much larger force of British regulars and their Indian allies.

His other interactions with people in Benedict Arnold's story: Gansevoort led his men in the siege of Fort Saint Jean and Chambly, capturing Captain John Andre in 1775. In 1811 he presided over the court-martial of James Wilkinson for treason.

Also of interest is that he is the maternal grandfather of author Herman Melville.
Read More 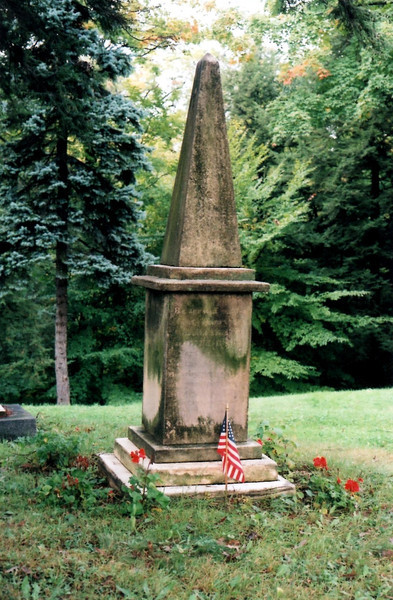 View of the monument