This circular building was begun in 1754 and completed in 1768. Bronze plaques have been placed over doorways to remember famous occupants. Apparently Andre's mother and his two unmarried sisters lived here from 1788 until their deaths. They bought it from the Taylor family. The last of the sisters died here at 93 years of age in 1845. So...why does the plaque say Major Andre lived here in 1770? He could not have visited when his family owned it since he was executed in 1780. It is thought that he was acquainted with the Taylors, and may have stayed with them. John Taylor was an artist, which would have attracted Andre, himself an artist. Read the story at: https://archive.org/stream/MajorJohnAndrAndNo.22TheCircusBath/WebtheSurveyofbathanddistrictno24_2009_pp50-51_djvu.txt

The following is found in "The Diaries of Marya Zaturenska 1938-1944" by Marya Zaturenska, Mary Beth Hinton and Patrick Gregory. Syracuse University Press, 2002; page 38-39:
"We arrived in Bath on a Thursday with the children and were enchanted with it. We spent an idyllic day just sightseeing -- the Roman Baths, the lovely architecture, the discreetly elegant shops, the eighteenth-century houses on the Circus (magnificent), a mixture of classic grandeur and simplicity, and full of historic associations....The strange lovely reticent house on the Circus, elegant, reserved. Tradition says the windows were always darkened. The money probably a result of their brothers' death. They carried their eighteenth-century culture into the nineteenth and their reticence shines from their tombs. The Trevalyan family have letters and some secrets -- pictures miniatures, etc. have occasionally shown up in auction rooms, one in Tunbridge Wells. But there was a letter they had which I would have given worlds to see --and a picture of the mother by Hogarth was known to be in existence and may still show up in an art gallery marked "subject unknown." I had once wanted to do a book on Andre but couldn't. For all his romance and tragedy he was too slight a figure."
Read More 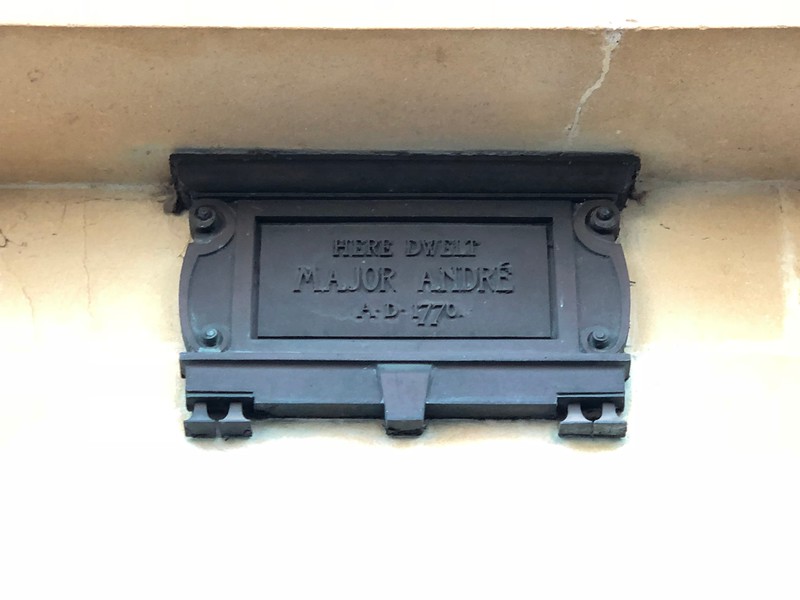 The plaque over the doorway at No. 22 The Circus. This and the next six photos are courtesy of Marc R. Jones.