General Anthony "Mad Anthony" Wayne was buried in two places. And not two successive burial places, but concurrent. Read the intriguing story to get an explanation: http://www.americanrevolution.org/wayne.html

Gen. Wayne was ordered to take his men and harass the British outside Philadelphia. British Gen. Charles Grey, who had John Andre as his aide, turned suddenly on the Americans in the early morning, killing more than 300, half the American force, in what came to be referred to as the "Paoli Massacre" (1777). Later, in July 1780, Wayne led an attack on a British-held blockhouse in New Jersey, but was beaten back, capturing instead a herd of cattle. Capt. Andre, an amateur poet, satirized the failure in "The Cow Chace," published in three installments in the Royal Gazette. He mocked the homespun American generals as "dung-born," and Arnold as "the Vender of the Pill," a reference to his early career as an apothecary. Wayne, apprenticed as a tanner in his younger years, was told that he should soon expect the "tanning of his hide." Andre closed with the verse:
"And now I've clos'd my epic strain, I tremble as I show it,
Lest this same warrior-drover, Wayne, Should ever catch the poet!"

You can find the whole work here: http://www.americanrevolution.org/war%20songs/warsongs78.html
Read More 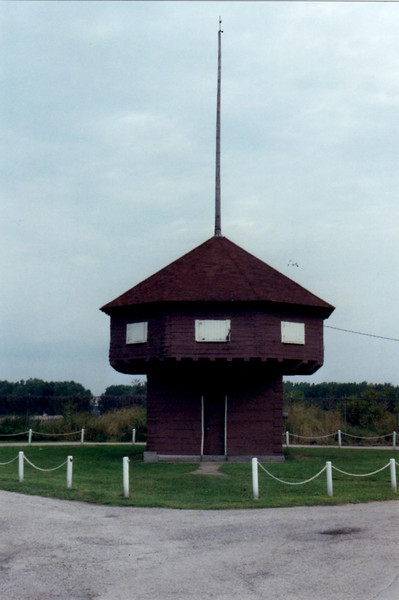 Reproduction blockhouse at the gravesite