Lt. Thomas Rogers, a Westford resident, was assigned to the gunboat New York, and fought in the Battle of Valcour Island. During the battle, one of the cannons burst, killing him. Rogers wife, left a pregnant widow, erected this monument to his memory.

Gunboat New York lost all its officers except the captain, but was the only one of the eight gunboats that escaped back to Fort Ticonderoga.

In the photos you'll see his gravestone, and also a painting of the moment of the explosion. Lake Champlain Maritime Museum divers recovered parts of the burst cannon in Valcour Bay in 1999, and they have been reconstructed and displayed. I photographed the painting and cannon at the time they were at the Westford Historical Society as a visiting exhibit highlighting the connection of Rogers to Valcour. They are now on permanent display at the Lake Champlain Maritime Museum in Vergennes, VT.
Read More 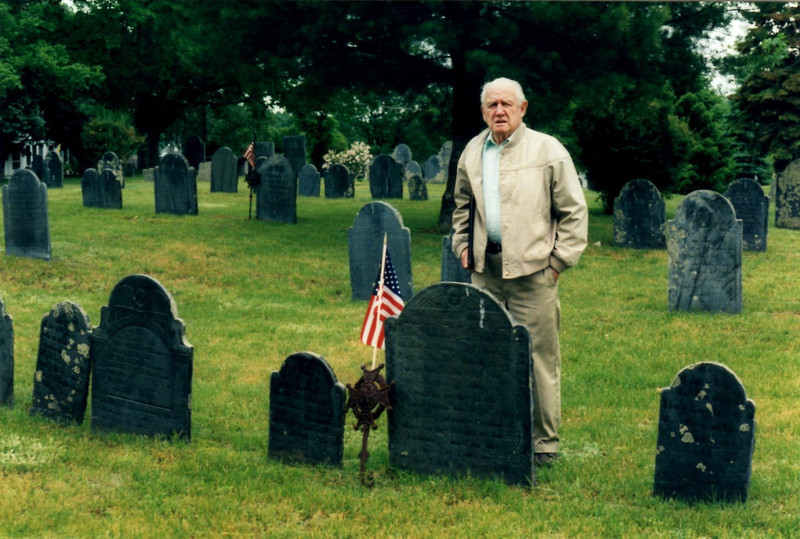 My father standing behind Rogers' gravestone. To locate the grave, enter the cemetery from Main Street using the middle gate (not from the one at the corner of Tadmuck Rd.) the cemetery road will immediately fork. Bear left at this point and park the car. Look to your left for a row of large trees. Walk up the slope behind the middle tree and look three rows back for Rogers' gravestone.