Abijah Wood (1743-25 Sep1819) served as a private on the schooner Enterprise on Lake Champlain in 1776. He is listed as wounded, with a number of other crewmen, on September 6.

I believe this is the correct Abijah Wood, as he is one of only two from Mass. to serve in the Rev War, and the only one from Dracut, which is the hometown Steve Darley gives for him in his book "The Battle of Valcour Island." This Abijah Wood lived in Dracut until moving to Hollis, NH in 1800, dying the day after his wife, who is buried beside him. Abijah is listed in Capt. John Ford's company at Fort Ticonderoga from July to December 1776.

Darley lists him as "wounded 9/6." For an account of the action that resulted in his wounding, see James Kirby Martin's book "Benedict Arnold, an American Warrior Reconsidered," page 256. Arnold had ordered crews ashore to prepare fascines to protect his fleet from boarding by enemy marines. Because the location of the British and Indians was unknown, he specified that the men should only approach the shore en masse, but apparently a boat from Enterprise went in before the others were ready, which resulted in three killed and six wounded before others arrived to drive off the enemy.
Read More 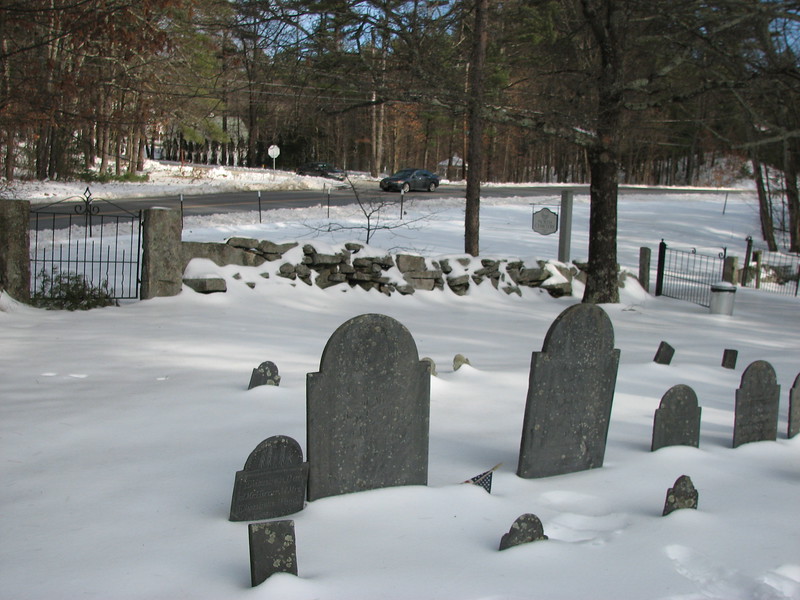 Abijah's grave is at left-center, with his wife's at right-center. They died a day apart. To help with finding the grave, note the iron gate in the left background. Silver Lake Road (Rt 122) is beyond the gate. The entrance road of the cemetery is to the right in this photo.