Benson Lossing, in his "Field Book of the Revolution" states that this building was the residence of Benedict Arnold when he was military governor of Philadelphia. He is the only source I can find that says that. All the others give the Richard Penn Mansion at 6th and Market Streets as his home during his time commanding the city.

The Slate Roof House was built in 1687, and stood until demolished in 1867. William Penn lived in the house for two years, 1699-1701, while also maintaining his country house at Pennsbury Manor in Bucks County.
During the sessions of the First Continental Congress, John Adams and John Hancock lived here. Maj. Gen. Chales Lee died in the house.

Welcome Park was built on the site in 1982. The name commemorates the ship that brought William Penn and over one hundred mostly Quaker settlers to Pennsylvania in 1682.
Read More 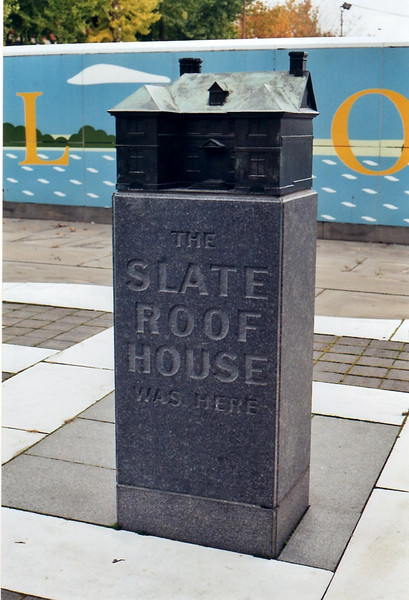 A model of the house on a pillar in Welcome Park