Rev. Bartholomew Booth built a home and mill here on Antietam Creek. The boarding school he operated catered to the sons of wealthy colonists. Benedict Arnold's two oldest sons attended this school during the time he was military governor of Philadelphia. See the following excerpt and the first photo for details.

Benedict Arnold enrolled his two sons, Benjamin (sic: should be Benedict) aged 10 and Richard aged 11 (sic: the ages seem to be reversed).
The reason why Mr. Arnold sent his sons off to boarding school was his marriage to his second wife, the brilliant and beautiful Margaret Shippen of Philadelphia. Benedict Arnold was then in command of Philadelphia, living in a most extravagant life style, and throwing expensive parties. He was distinguished by his bravery, and by his wounds won in battle, and the boys looked up to him in awe. Of the eldest, Benedict, his aunt wrote, “Ben is eager to hear everything in relation to his father.”
Letters have surfaced showing Benedict Arnold writing to Mr. Booth on how to educate his children. “I wish their education,” he wrote, “to be useful rather than learned. Life is too uncertain to throw away in studies that perhaps one man in ten thousand has the genius to make a figure in. You will Pardon my dictating to you, Sir, but as the fortune of every man in this country is uncertain, I wish my sons to be educated in such a manner that with Prudence and Industry they may acquire a Fortune, as well as become useful Members of Society.” He wrote that they were also to have an allowance, and keep a regular account of their expenses, which account was to be forwarded to him. “This will teach them Economy and Method,” he wrote. And he adds, “I will expect them to write to me frequently—of this they will doubtless want reminding.”
Benedict Arnold’s marriage, court martial and trial took place during their first two years at Delamere (sic: Arnold was never tried, but it was during this time that his treason was discovered). At this time their Aunt Hannah wrote, “We hear nothing from the little boys in Maryland”.
"In the year of Arnold’s downfall, the boys did not go home for the Holidays, but stayed at Delamere." (These quotes are found on the website http://johngensorphotos.com/?tag=delamere ) 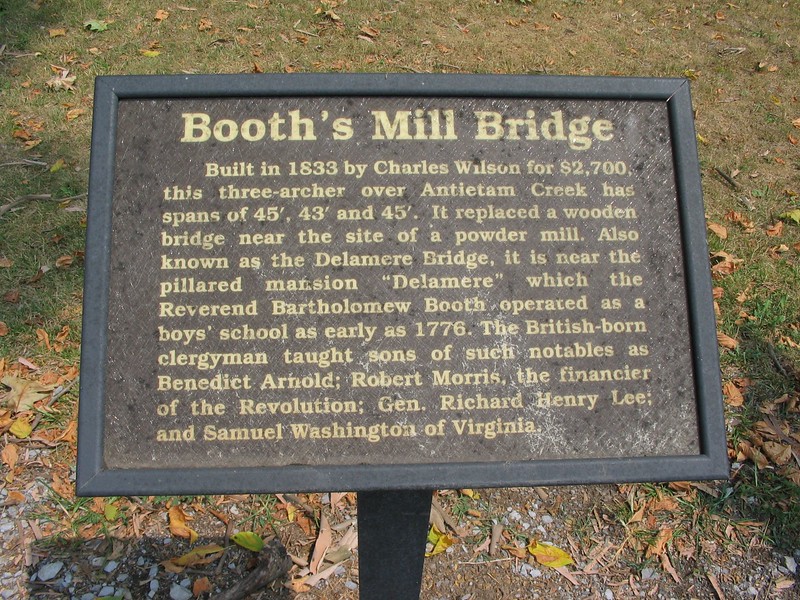 Booth's Mill Bridge Marker (as it looked when newer)