Ramparts From Which the British Shot Arnold

There is a terrace along the street at this point which allows a look off the high wall. There is another terrace, with cannon, opposite 75 rue des Remparts.

It was from one of these places that British defenders shot and wounded Arnold during his assault. On the street below this point is a plaque on a building which tells about the battle. (See my gallery on this: "Site of Arnold's Wounding")

There is a stairway from the terrace down to the street below (if you want to go see the plaque.)
Read More 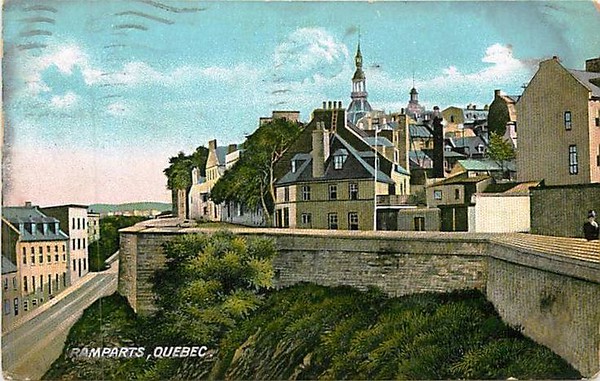 Old postcard view, circa 1910. The yellow house in the center of the picture is now 51 rue des Ramparts. The terrace from which Arnold was shot is the prominent angle in the wall to its left. The building with the dormers on the lower street is still there, and the building with the plaque about Arnold's wounding is just out of view on the left.