After crossing over the St. Lawrence River on the night of Nov. 13-14, Arnold and his troops spent the next four days probing for weakness in the city's defenses. But with no artillery, and an enemy that would not be enticed out to battle on the Plains of Abraham, a decision had to be made. The Americans did not have enough men to enforce a blockade of the city. The best plan would be to move away from Quebec up the St. Lawrence to await the arrival of Montgomery and his force. On Nov. 19 Arnold and his men marched to Pointe-aux-Trembles, the present-day Neuville, twenty miles to the west. Montgomery arrived on Dec. 1. The combined American force began the march back to Quebec on Dec. 4.

Website of the organization currently using the old convent: http://www.espaceartnature.com On their website is found the following: "Bombarded by the naval forces of Arnold and Montgomery General in 1775, after the Battle of Quebec, during the US war of independence, it will be rebuilt in 1778. The current appearance of Second Empire style dated 1878. This is the third construction. The convent served to the education of girls from 1716 to 1966." (Google Translator version.) [Note: There are many problems with this story. The retreat after the Battle of Quebec was in spring of 1776. Montgomery had been dead since the night of the attack, December 31, 1775. Arnold was no longer in command of American forces in Quebec, but was in Montreal. The retreating Americans, under Gen. Thomas, had no naval force at all.]

A similar story is related on the Neuville Historic Society website: http://histoireneuville.com/f4even_militaires.html "The occupation of Neuville by US troops. In 1775-1776, the Americans wish to New France a US territory for New England. Benedict Arnold's troops who arrived by the Chaudière River are depleted and unable to attack Quebec because its troops are too poor condition. Arnold therefore passes Quebec Neuville and goes to where it occupies the place with his troops as of November 15, 1775 to await reinforcement troops of General Richard Montgomerey which should arrive on Québec through the Richelieu River. But troops Montgomerey also suffered major difficulties due to the hard winter, and it can only reach Arnold's troops are in Neuville, because too sick soldiers and too little to prevent attack Quebec. Both commanders have no choice but to return home in April 1776, but not without emptying their cannonballs on Neuville before leaving. Today, almost all the inhabitants of Neuville have cannonballs. The people, making their gardens regularly discovered cannonballs still in the 1970s If you go to the monastery of Neuville, you will see a monument made cannonball. Just recently, there were fences house whose stakes were completed by cannonballs. The local Society, there are demonstration balls." (Google Translator version) [Note: In this account, the unsuccessful attack on Quebec is not mentioned, and again Montgomery and Arnold get blamed when they weren't there during the retreat. And there is no explanation of why the convent was shelled, but apparently the people of Neuville have the cannonballs to prove it!]

Here's the story as it appears on the website Canada's Historic Places: "In 1775, the monastery was bombed by the US fleet of Benedict Arnold (1741-1801) and Richard Montgomery (1736-1775) and rebuilt immediately." (Google Translator version) http://www.historicplaces.ca/en/rep-reg/place-lieu.aspx?id=7970&pid=11146&h=Neuville [Anyone familiar with the story will know how much Montgomery and Arnold would have liked to have a fleet...but they did not!]

In Mark R. Anderson's book "The Battle for the Fourteenth Colony", page 317, we read of a naval engagement between British warships and two American vessels attempting to retreat upriver. The Americans ended by scuttling and setting afire "Gaspe" and "Maria" at Pointe-aux-Trembles. Perhaps British gunnery was responsible for the destruction of the convent (?)
Read More 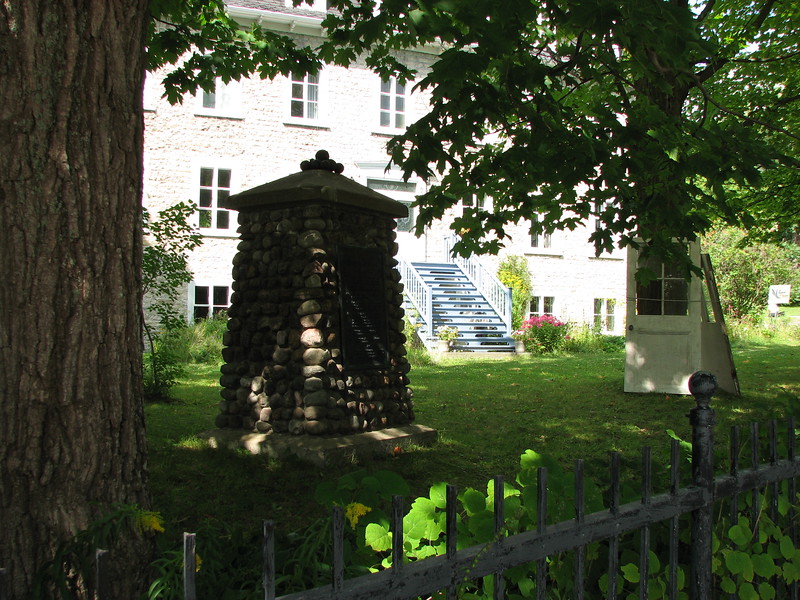 The monument in its setting, on the front lawn of the old convent