"Holland House", the home of Samuel Holland, was located in the vicinity of Parc Samuel-Holland, at the SE corner of the intersection of Chemin Ste. Foye and Avenue Holland, Ville de Quebec, QC

After Arnold was joined by Gen. Montgomery in Pointe-aux-Trembles, the army returned to Quebec City to begin the siege and eventual attack. Montgomery used Holland House as his headquarters. After the unsuccessful attack in which Montgomery was killed, Arnold commanded the American forces from Holland House while he kept the city under siege in the winter of 1776. Arnold left Quebec on April 12, 1776, after Gen. Wooster arrived to take command.

An interesting webpage with information about the original Holland House and its successor: http://www.lowensteyn.com/Samuel_Holland/venus.html
Read More 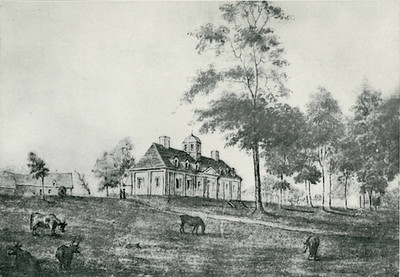 The original Holland House (now gone) on Ste. Foye Road, Quebec. This old print is as seen on the website: http://www.diederikvanvleuten.nl/Teksten/page12/page12.php The cupola was a later addition.