Wreck of the "General Arnold"

Plymouth's worst shipwreck occurred at Christmastime in 1778. The privateer brig "General Arnold" went aground in a shoal area of the harbor as it sought refuge from a violent winter storm. Plymouth residents could see the ship being pounded by ferocious waves, but were unable to do anything to help. When they at last were able to reach the wreck after the storm abated, by walking over the frozen ice of the harbor, many of the crew were found frozen to death. The bodies were buried at Burial Hill Cemetery, where a monument was erected to their memory. The captain of the ship, James Magee, survived the ordeal and always regretted his decision to attempt to enter the harbor instead of riding the storm out at sea. Upon his death in 1801, he was buried with his former crew, as he had wished. His name was inscribed on the monument.

The ship was undoubtedly named for Benedict Arnold, the heroic battlefield commander of the early war years. According to Randall, p. 412, Arnold had bought a schooner from Robert Shewell, Jr. for 1974.5.4 pounds, which he outfitted as a privateer and named "General Arnold." That occurred in August of 1778. I have no idea if this is the same vessel, as there seems to have been more than one privateer named after the famous general.

Here are links to the story:
http://historicaldigression.com/tag/benedict-arnold/
http://www.masshistory.com/the-general-arnold-wreck-at-plymouth
Read More 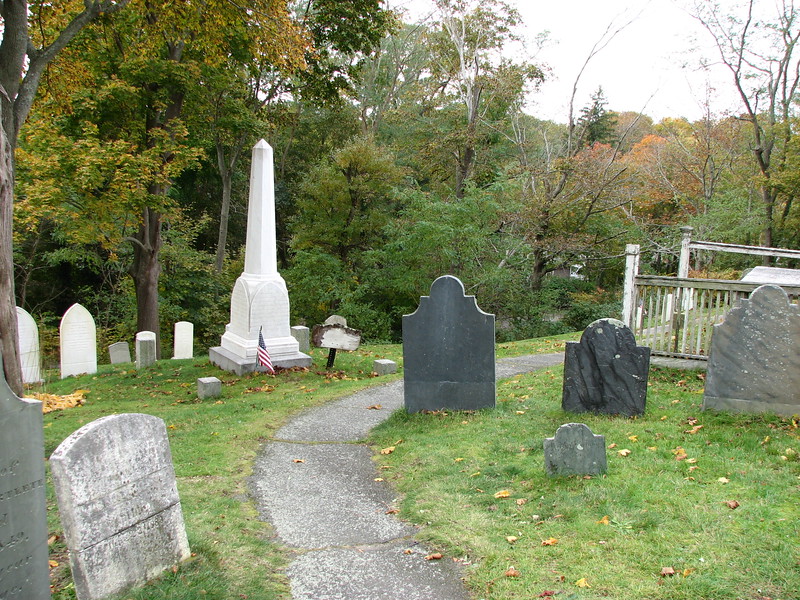 Approaching the monument (the white obelisk). To locate the monument, enter the cemetery via the main entrance on School Street at Town Square. Climb the stairs and brick walkway to the top of the hill. Turn left on the paved path, then take an immediate right on another paved path. Follow that along the crest of the hill nearly to its end, and look for the distinctive monument on your left.