An excellent blog by J. W. Ocker gives a good account of the events surrounding the death of Thomas Boyd. Many of the photos used in this gallery are his. See his blog here: http://www.oddthingsiveseen.com/2018/01/here-we-go-round-boyd-parker-torture.html


Thomas Boyd (1756-1779) served as a sergeant in Capt. Smith's company of Pennsylvania riflemen on Arnold's March to Quebec. He was taken prisoner in the failed attack and held prisoner by the British. After his release and exchange, he continued to serve, and was on Gen. Sullivan's expedition against the Indians in upstate New York. While leading a party of soldiers, he was ambushed. Some of the soldiers were killed at the site and others, including Boyd, were taken prisoner. Boyd and Parker were horribly mutilated and killed at what is now known as "Torture Tree." They were buried at that site when their bodies were discovered by Sullivan's troops. They lay there until 1841, when, with much ceremony, they were removed and reburied in Mount Hope Cemetery in Rochester.
Read More 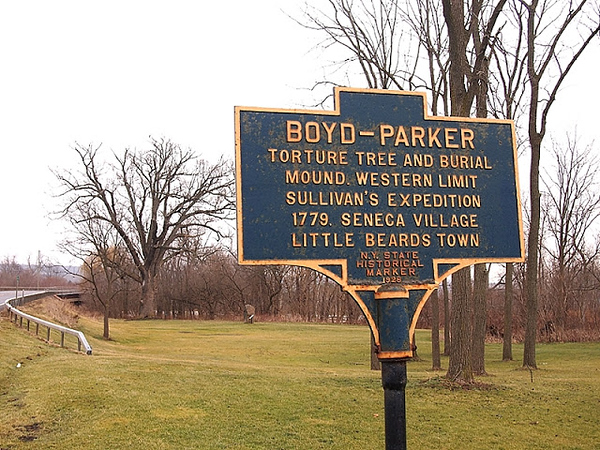 Historical marker at Boyd-Parker Memorial Park. "Torture Tree" is to the left of the marker.
Photo by J. W. Ocker (used with permission)