Freeman Judd served as a private in Hanchett's company on the Arnold Expedition. He was not captured. Freeman wrote an account of his experiences (see "The Lost Journal of Freeman Judd", by Mark Sullivan Sept. 25, 2018, available online in Journal of the American Revolution.)

Freeman's brother Daniel Judd was on the Expedition in the same company. He also survived the attack, but died of smallpox on February 2, 1776 as the Americans maintained the siege of the city. Freeman tells of this death in his journal.
Read More 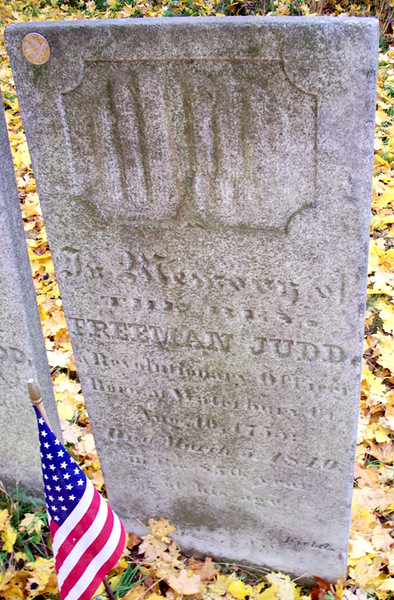 Photo is from Mark Sullivan's excellent article in Journal of the American Revolution entitled "The Lost Journal of Private Freeman Judd" 2018. The grave is said to be located "near the southwest corner of the cemetery and can be easily found, having a fair sized headstone giving his name" (from an account written by his grandson A.B. Judd in the newspaper Union Sun Jan. 30, 1904.)