Mercy Scollay is mentioned in most biographies of Benedict Arnold. She was the fiancée of Gen. Dr. Joseph Warren, a patriot political and military leader in the early days of the Revolution. He was killed in the Battle of Bunker Hill, leaving four young children whose mother had died previously. Mercy made it her mission to care for those children. Although Warren's brother John stepped in and adopted them, Mercy remained a big part of their life, at times taking them into her care. As noted in my gallery on Gen. Warren (q.v.), the Massachusetts Provincial Congress was slow to appropriate funds for the family of the slain general, so Benedict Arnold stepped in to lobby the congress on their behalf, and to send his own funds to help in the meantime. Most of the biographies mention this to demonstrate that Arnold had a generous, and not a greedy, heart. Christian DiSpigna's 2018 biography of Warren, "Founding Martyr," says that recent research has found that Arnold was even more generous with his own funds than previously known. He cites a letter from Mercy to Arnold (footnote for p.205, on p. 286.) The amount Arnold had sent by July of 1780 was nearly 3000 pounds for the children's boarding, clothing and education.

Mercy never married, and was considered Warren's unofficial widow. She later moved to Medfield and helped with the children of her sister Mary, who had married Rev. Thomas Prentiss. Mary named a daughter Mercy Scollay Prentiss in 1800, when her sister was 59 years of age.
Read More 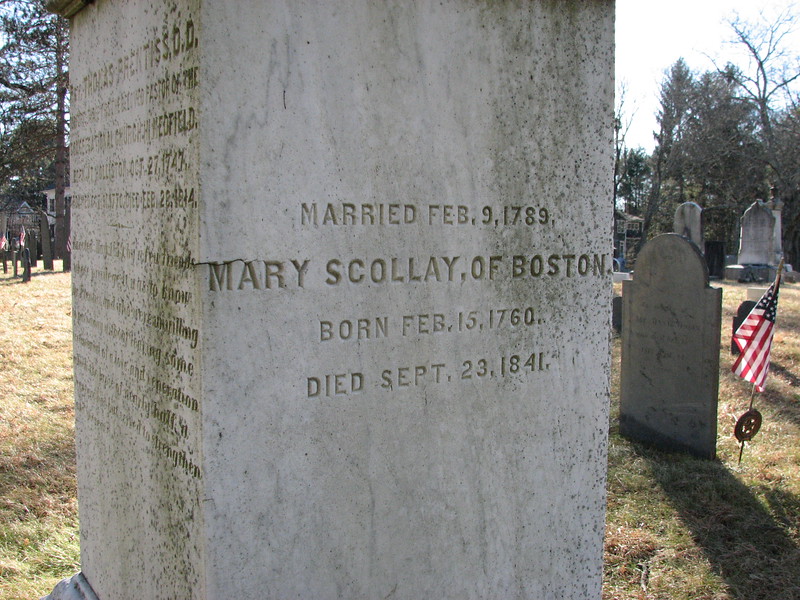 Inscription on the side of the Prentiss monument, in honor of Mercy's sister Mary.