Grave: Forest Hills Cemetery, 95 Forest Hills Av, Jamaica Plain (Boston), MA. See the cemetery website for a map to the gravesite: http://www.foresthillscemetery.com/ Note: According to Wikipedia, Warren was originally buried by the British, then exhumed by his brothers and Paul Revere, who identified the body from an artificial tooth he had made for Warren. The next burial was in Granary Burying Ground, and then in St. Paul's Cathedral in 1825, and finally in the family plot at Forest Hills in 1855.
Henry Dearborn, a participant on Arnold's March to Quebec, is also buried in this cemetery.

Another statue is in front of Roxbury Latin School, 101 Saint Theresa Avenue, West Roxbury (Boston), MA. Joseph Warren was a 1755 alumnus of the school

Joseph Warren urged the Massachusetts Committee of Safety to undertake the Fort Ticonderoga expedition, which Arnold led as Colonel.

In the Battle of Bunker Hill, Warren was killed, leaving orphan children. Arnold provided $500 for their care and education, due to the "grateful sentiments I shall ever feel for the memory of my friend." He pressed Congress to provide for the children, and when they took no action, he gave $500 more. Due to his persistence, Congress eventually resolved to pay for the care of the children.
Read More 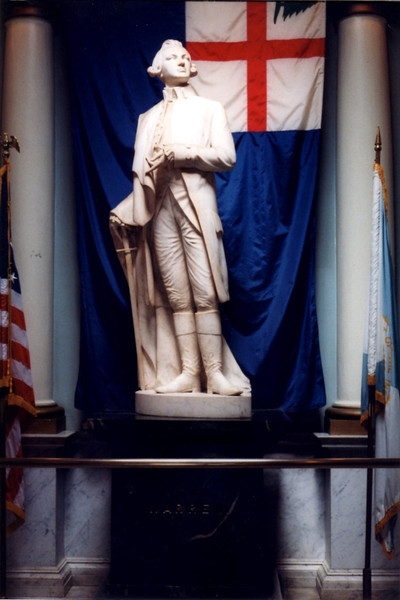