This is Benedict Arnold's father's brother. He died during the time Benedict was serving as a British general.

I. N. Arnold, in his biography of Benedict Arnold, gives this account: "Captain Oliver Arnold, the uncle of Benedict, died in New Haven in 1781. He had long been an invalid, and left very little for the support and maintenance of his family. After the death of his uncle, Benedict was always liberal and kind to them; and even after his exile in England, did not forget his cousins, and his remittances to them are said to have been generous. He assisted the eldest son to a liberal education; but the young man, grieved and indignant at the conduct of his cousin, joined the naval service of the United States, and attaching himself to the celebrated Paul Jones, hoped by deeds of desperate daring to efface the disgrace which his cousin's treason had attached to the name. He returned to New Haven with his health broken, and soon died."

Here's a quote by Eric D. Lehman, from his book "Homegrown Terror": "Though Arnold had sent his uncle [long an invalid] a small stipend in previous years, [upon their father's death] his two cousins now expressed their hatred for their turncoat relative, putting their patriotism above family loyalty."
Read More 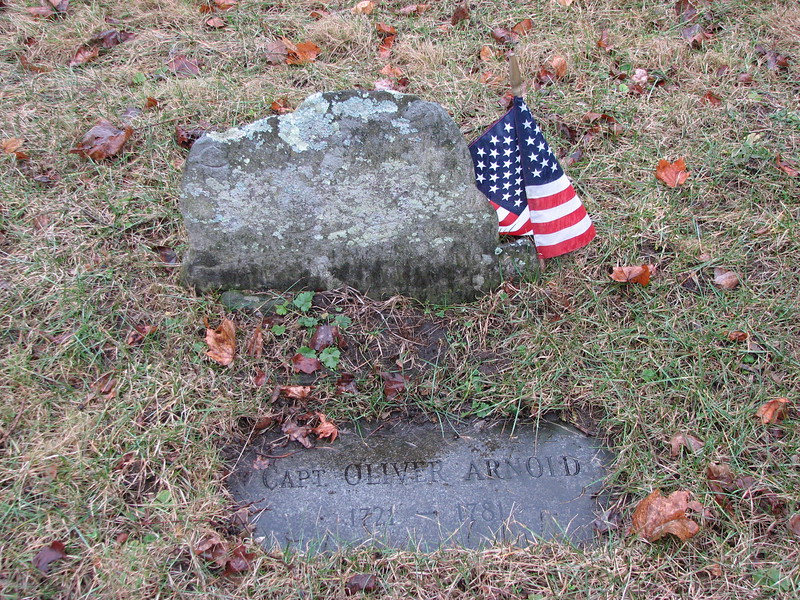 Grave of Oliver Arnold. To locate the grave, enter the cemetery and follow the main path, which dips. At the lowest point, the grave will be about 30 feet away on your right.