The following passage is found in "Passages from the English Note-Books of Nathaniel Hawthorne", under the entry for March 23rd, 1854:
"A son of General Arnold, named William Fitch Arnold, and born in 1794, now possesses the estate of Little Messenden (sic) Abbey, Bucks County, and is a magistrate for that county. He was formerly Captain of the 19th Lancers. He has now two sons and four daughters. The other three sons of General Arnold, all older than this one, and all military men, do not appear to have left children; but a daughter married to Colonel Phipps, of the Mulgrave family, has a son and two daughters. I question whether any of our true-hearted Revolutionary heroes have left a more prosperous progeny than this arch-traitor. I should like to know their feelings with respect to their ancestor."
Read More 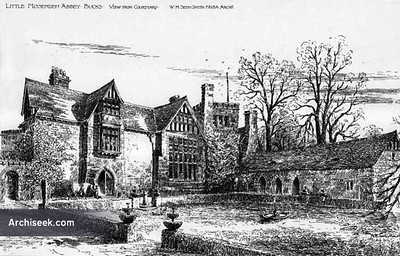 Little Missenden Abbey, as it appeared in 1895, as seen on the website: http://archiseek.com/2009/1895-little-missenden-abbey-buckinghamshire/ This is no doubt an enlargement or rebuild of the home William Fitch Arnold owned.