After the Ridgefield action, Congress gave Arnold the Major General's commission earlier denied him. They did not, however, give him the seniority in rank that would reestablish his proper place in the army. Gen. Washington gave him a supportive letter to Congress, which Arnold presented to the delegates here on May 19, 1777.

After a fruitless month of attempting to rectify this "fundamental matter of rank and honor," Arnold presented his resignation to the Continental Congress sitting in this building on July 11. He did not know that the Congress had just received an urgent communication from Gen. Washington. To counter Burgoyne's advance from the north, Washington asked for the services of "an active, spirited officer." He specifically asked for Benedict Arnold. The delegates chose to ignore Arnold's resignation, and ordered him "immediately to repair to headquarters and follow the orders of General Washington."

For the good of the country, Arnold put aside his feelings of hurt honor, and agreed to the possibility of serving under those who had recently been his juniors in rank. (ref. Martin, "Benedict Arnold," pp 325-343)
Read More 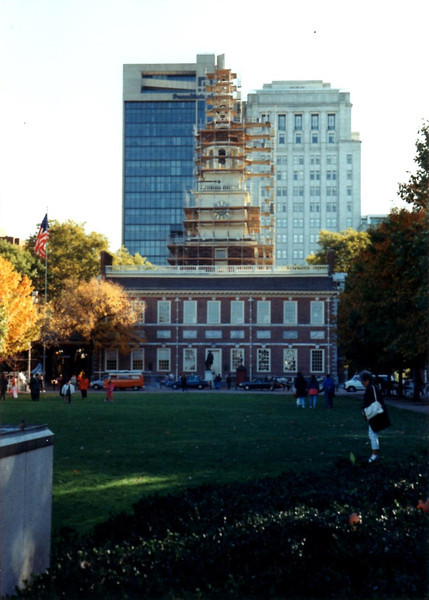 View of Independence Hall during renovations a number of years ago. This visit was prior to the building of the new Liberty Bell pavilion, which today would be seen to the right in this photo. Independence Hall can be better seen from the pavilion as the tower stands against the open sky and not tall buildings.