Saratoga National Historical Park
accessed from either NY 32 or US 4, Stillwater, NY

A monument to Kosciuszko has been erected along the park road, not far from the Neilson Farmhouse, which served as Benedict Arnold's headquarters during the battles.

Brigadier General Thaddeus Kosciuszko, a Polish military engineer, served the Continental Army in that capacity. When the American army arrived at Stillwater, it was realized that the position was not defensible. Kosciuszko and Benedict Arnold rode four miles north and selected Bemus Heights as the best place for the Americans to build their defensive works. Kosciuszko oversaw the construction.

There are statues and memorials in honor of Kosciuszko in many American cities and European countries. A gigantic mound was built in Krakow, Poland in the early 1800s, and is still a tourist attraction today.
Read More 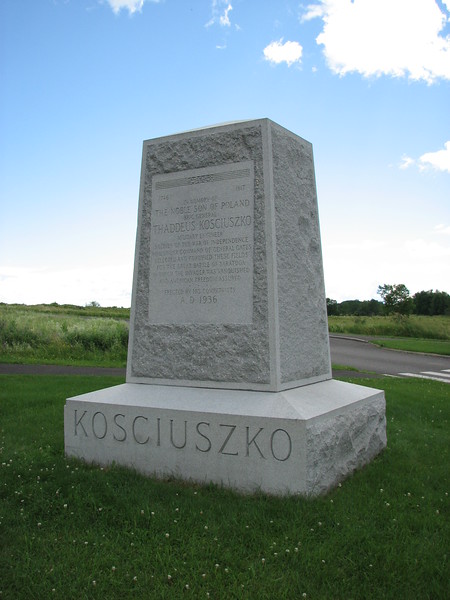 The monument to Kosciuszko, situated along the park road near the Neilson Farmhouse.