on Burgoyne Rd (County Rt 338), just west of the Village of Schuylerville, NY (Burgoyne Rd is off US Rt 4)

The cornerstone for this monument commemorating the Battle of Saratoga was laid in 1877. It was completed in 1882. The 154.5 foot obelisk features four niches, three of which contain statues of American generals. Gen. Philip Schuyler faces east, toward his Saratoga home. Gen. Daniel Morgan faces west, where his troops were positioned to help surround the British. Gen. Horatio Gates faces north, the direction from which the British invasion came. The fourth niche is vacant, and symbolizes Gen. Benedict Arnold's valiant leadership in the battle. Because of his later treason, he has no statue. 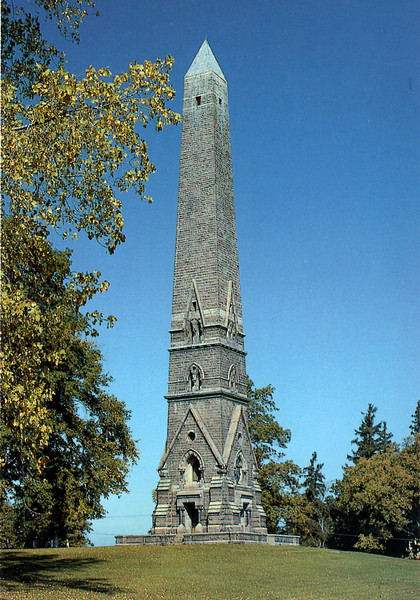 Postcard view of the Saratoga Battle Monument. Gen. Schuyler's statue can be seen looking to the right