The following is found on the website of the state park:
"Button Bay, a 253-acre park, is located on a bluff in Ferrisburgh along the 130-mile long Lake Champlain. Historically, the area has been visited by such notables as Samuel De Champlain (1609), Ethan Allen (1776), Ben Franklin (1776), and Benedict Arnold (1777). What once operated as a farm, opened as a state park in 1964. The park is so named for the button-like concretions formed by clay deposits found along the shoreline."

Benedict Arnold brought the officers of his Valcour fleet ashore at Button Bay for a feast as they awaited the British in the days prior to the battle. The fleet had survived a sudden and ferocious storm on the lake on August 26, so on the next day Arnold invited the captains and lieutenants ashore here where they competed in marksmanship with small arms, followed by a celebratory feast. Toasts to Arnold's health were offered, and his men named "Arnold Point" in his honor. Arnold took the opportunity to address the challenges ahead, and encouraged his men to give it their best.

You can read a first-hand account of the day in the journal of Bayze Wells here: http://digitalcommons.providence.edu/cgi/viewcontent.cgi?article=1017&context=primary (Scroll to page 272)
Read More 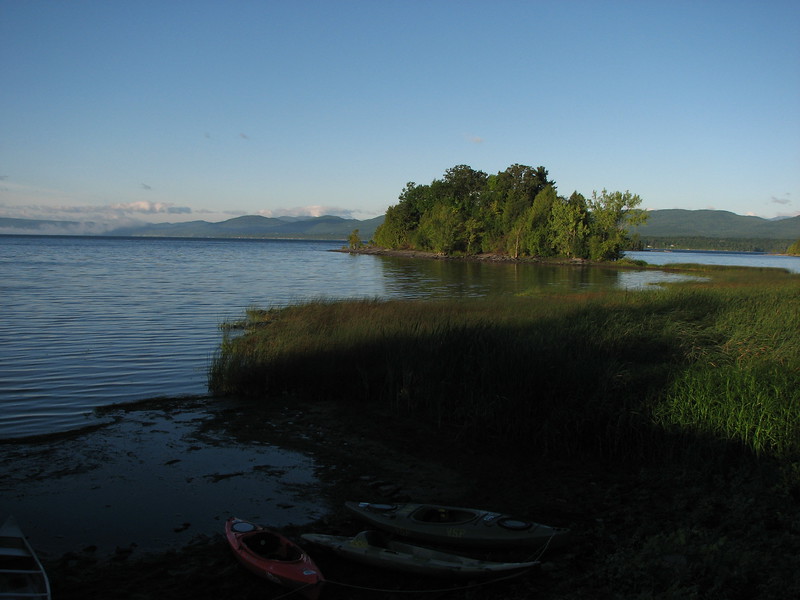 View of Button Bay from the north shore, in Button Bay State Park. The bay is to the left and the open lake is to the right. Button Island is in the distance.