Blandford Church Cemetery, 319 South Crater Rd, Petersburg, VA See the website: https://petersburgpreservationtaskforce.com/museums/blandford-church/
During the Virginia campaign of 1781, Arnold was initially in command. He was later superseded by Phillips, but resumed command on Phillips' death from illness. Arnold ordered that Gen. Phillips be buried in an unmarked grave to protect it from disturbance.

Phillips is in Arnold's life story in several; other ways. He was in charge (along with Capt. Sir Charles Douglas) of the shipyard in St. John while the British fleet was built that would oppose Arnold at the Battle of Valcour Island. The next year, as the British army approached Fort Ticonderoga, he proposed the placement of cannon atop Mount Defiance with the words "Where a goat can go, a man can go. And where a man can go, he can drag a gun."
That action forced the surrender of the fort without a shot being fired. Phillips was at Saratoga, where he was taken prisoner along with the entire army (he was later exchanged for Gen. Benjamin Lincoln.)


He died at "East Hill", also known as "Bollingbrook" (see my page on that.)
Read More 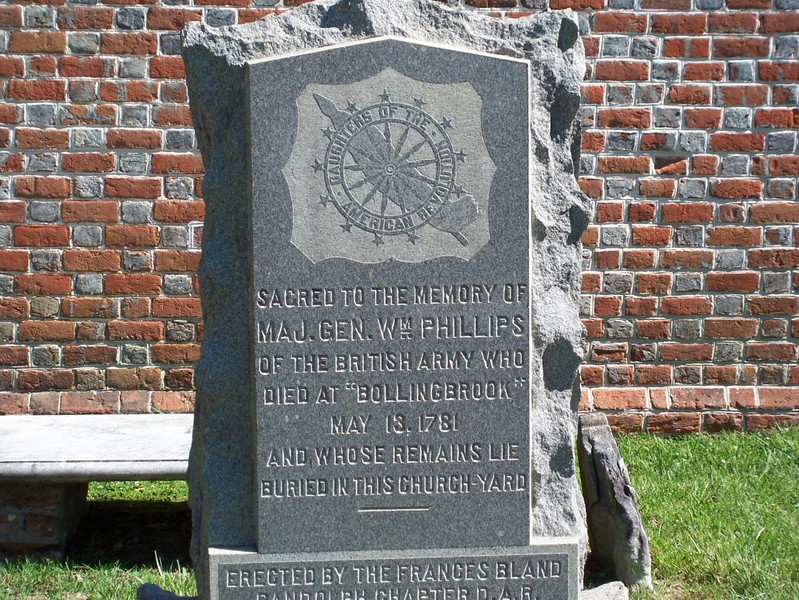 Stone erected in memory of Gen. Phillips by the DAR, just to the right of the walkway at the double-door south entrance of the church. The exact location of his grave in this cemetery is unknown. As seen on findagrave.com