James Armistead Lafayette was an African-American slave who attached himself to Gen. Lafayette, and served as a American double-agent during the Revolutionary War. He was sent to join Benedict Arnold's British unit during the Virginia campaign. He became trusted by Arnold, who used him to guide his soldiers. James was able to relay intelligence back to Lafayette on Arnold's plans and operations. He also fed Arnold false information to deceive the British.

There is a thorough article about James on Wikipedia: https://en.wikipedia.org/wiki/James_Armistead_Lafayette

The location of his grave is unknown.
Read More 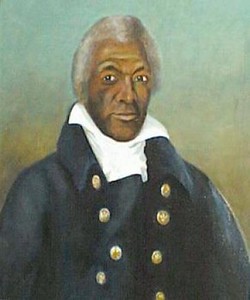 Painting of James Armistead Lafayette.
Image is in the public domain.