This was another place the expedition had to portage. The dam was of course not there at the time. The river above the dam has become a lake and lost its original appearance. The takeout place below the dam is marked "Arnold's Landing" on GoogleMaps. The modern canoe path, which is the route of the original portage, can be followed on the eastern side of the river.

According to a 1937 book: http://www.forgottenbooks.com/readbook_text/Maine_A_Guide_Down_East_1000314602/417 "On the eastern bank of the river below the falls, an old road runs a few hundred yards to Arnold's Landing. Here in a quiet little cove, on a ledge near the water's edge, is an Arnold Trail Marker, surmounted by a flagstaff, with a tablet commemorating this as the spot where Benedict Arnold and his army landed October 7, 1775, remaining overnight prior to the carry around Caratunk Falls."
According to the DAR, the inscription is: "Landing place of Colonel Benedict Arnold and his eleven hundred men on their expedition to Quebec October 7, 1775. This tablet placed by Abigail Chamberlain Whipple Chapter of the Daughters of the American Revolution, 1913."


According to the National Register of Historic Places application for this site: "The most notable historic find is a boulder incised "B. A." and "1776". Although it is possible these markings are of more modern origin, their weathering suggests antiquity and authenticity. It is known that a Continental Army force led by Benedict Arnold passed this point on a 1775 expedition to attack Quebec City in the American Revolutionary War, and this marking may be a relic of that journey." See this info at: https://en.wikipedia.org/wiki/Caratunk_Falls_Archeological_District
They don't explain why the wrong date is inscribed!
Read More 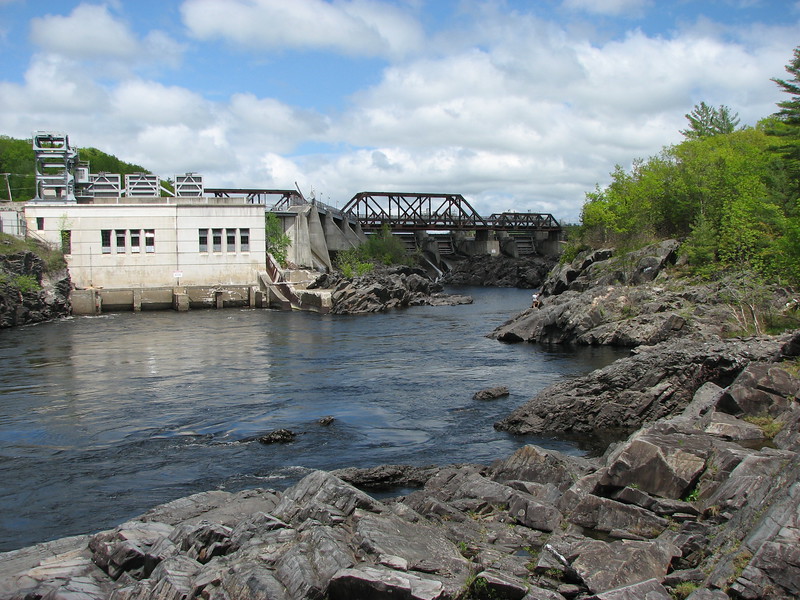 View of the falls from below the dam