Richard Varick served as an aide to Gen. Schuyler and interacted with Arnold during the time the Valcour fleet was being built. Arnold, overseeing construction, praised Varick for his tireless efforts to secure all the needed supplies.

At the time he assumed command at West Point, Arnold called on Varick to serve as his writing aide. When Arnold's treason was discovered, his aides came under suspicion. A board of inquiry exonerated Varick, who later in life served as mayor of New York and president of the American Bible Society.

The photos in this gallery are used with the kind permission of the photographer, Atty. Robert Curtis.
Read More 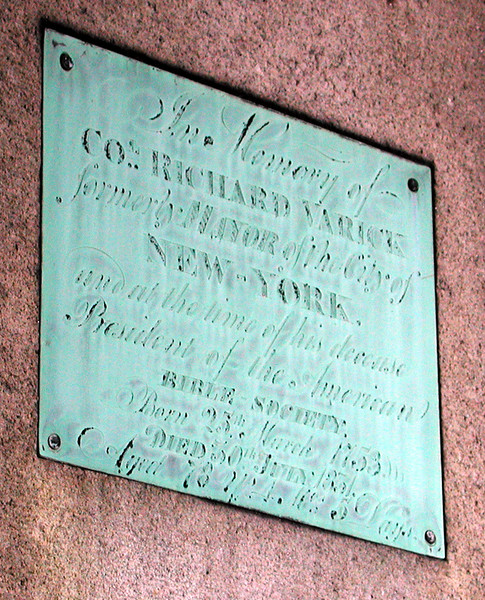 Close-up of the plaque on Varick's gravestone.
The engraving reads:
"In Memory of
Col. Richard Varick
formerly Mayor of the City of
New York
and at the time of his decease
President of the American
Bible Society
Born 25th March 1753
Died 30th July 1831
Aged 78 years 4 months 5 days"