John Laurens served as ADC to General Washington. After leaving that post for active command, he remained close to Washington. After Arnold's treachery was discovered, Wsahington wrote a letter to Laurens giving his thoughts about the traitor. The letter is often quoted in books about the incident, to reveal Washington's feelings on the matter. John Laurens was killed in battle in 1782.

Mepkin Plantation (now Mepkin Abbey, a Trappist monastery), was the home of John Laurens' father Henry Laurens. Henry served as president of the Continental Congress, and signed Arnold's commission to the rank of Major General (see my gallery on Charles Thomson for a picture of the commission). Henry spoke highly of Arnold during the time when Arnold was attempting to regain his seniority in rank. Henry Laurens was cremated, and his ashes buried here at his plantation. A cenotaph is in the Laurens Family Cemetery.
Read More 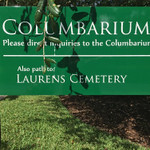 Signs on the Abbey grounds lead you to the Laurens Family Cemetery.