Rev. Peters was an Anglican clergyman with distinct Tory sentiments. During the prelude to the Revolutionary War, he suffered at the hands of the Sons of Liberty. According to his own writings, his home in Hebron, CT was attacked by a mob of radicals led by Benedict Arnold. This is certainly erroneous. Indeed much in Peters' historical accounts is considered embellished and self-serving.
After being driven out of Hebron, he was again confronted by Sons of Liberty in New Haven, and he gives this account, as included in Homegrown Terror, by Eric D. Lehman (p.25): (quotation marks indicate Peters' words)
According to Peters, admittedly not the most reliable witness, when he fled Windham County's mob rule to New Haven, he was met with more of the same from the local Sons of Liberty, including Benedict Arnold. At ten o'clock "Arnold and his mob came to the gate," and after Peters said he would not come out, supposedly "holding a musket" in his hand, Arnold told the mob to "bring an axe, and split down the gate." Peters replied, "Arnold, so sure as you split the gate, I will blow your brains out, and all that enter this yard tonight!" When Arnold retreated, the mob called him a coward, but he said, "I am no coward; but I know Dr. Peters' disposition and temper, and he will fulfill every promise he makes; and I have no wish for death at present." According to Peters, David Wooster showed up with another mob a half hour later, and these and other threats encouraged him to leave Connecticut altogether, heading for Boston. (end of Lehman excerpt) 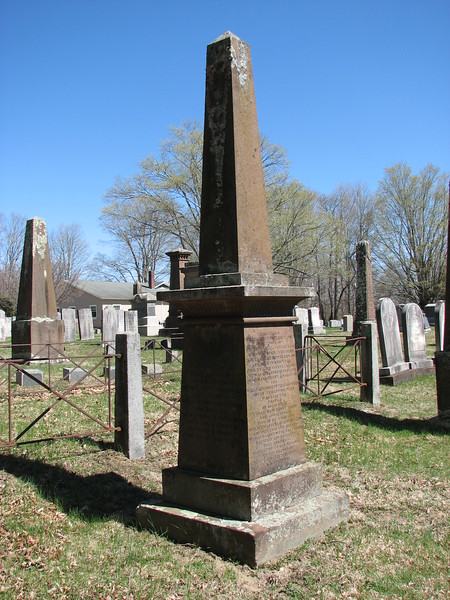 The monument erected over Rev. Peters' grave by his grandson.