Wikipedia says that Manor House was formerly the White House. See their article at: https://en.wikipedia.org/wiki/Manor_House,_21_Soho_Square

Comparing that with the entry in the old book whose pages I have reproduced in this gallery leads me to think that Wright's Hotel and Manor House are one and the same. Of course the current building may be a replacement.

So in any case, Wright's Hotel was in the northeast corner of Soho Square. The significance to the Arnold story is found in Audrey Wallace's book "Benedict Arnold, Misunderstood Hero?", on pages 153-155. She tells that in August 1795, Arnold addressed the West Indies Planters and Merchants Company, of which he had acted as agent during his time in the Caribbean earlier that year, at Wright's Hotel in Soho Square. His exciting experiences in the West Indies are recounted in Chapter XIII of Wallace's book.
Read More 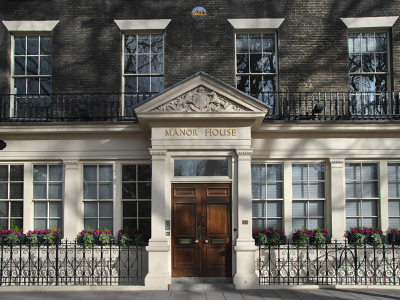 Closer view of the front of the building. Note the inscription "Manor House" over the front door.