It was in this port that the Arnolds landed in January 1782, after a winter crossing of the Atlantic from America. They were on separate ships in the same convoy. Although their destination was London, it was usual at this time to travel by land from Falmouth to avoid the potential of confrontation with the French navy.

It was at an inn in Falmouth twelve years later that the Frenchman Tallyrand encountered Benedict Arnold, who was in that port awaiting his ship for a trading voyage to the Caribbean in 1794. The story is recounted in many of the biographies of Arnold.

Here is Tallyrand's account of the meeting, as found on the internet:
'The innkeeper at whose place I had my meals informed me that one of his lodgers was an American General. Thereupon I expressed a desire of seeing that gentleman, and, shortly after, I was introduced. After the mutual exchange of greetings, I put to him several questions concerning his country, but from the first, it seemed to me that my questions annoyed him. Having several times vainly endeavored to renew the conversation, which he always allowed to drop, I ventured to request from him some letters to his friends in America. "No," he replied, and after a few moments of silence, noticing my surprise, he added, "I am perhaps the only American who cannot give you letters for his own country— all the relations I had there are now broken—l must never return to the States." He dared not tell me his name. It was General Arnold. I must confess that he excited my pity, for which political Puritans will perhaps blame me; but I do not reproach myself, for I was a witness of his agony.'
Read More 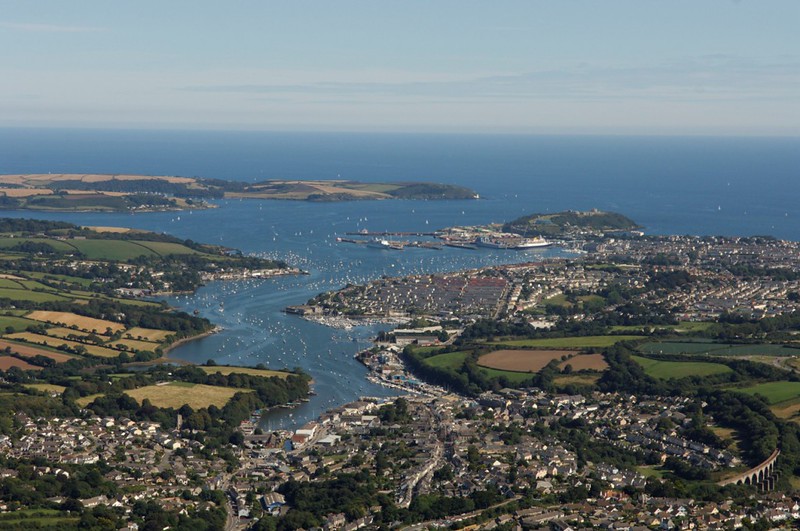 Aerial view of the port of Falmouth