On June 21, 1801, Arnold was buried in the crypt of this church. The building was constructed in 1777. The inscription on his grave reads, in part: "In this crypt lie buried the bodies of Benedict Arnold sometime general in the army of George Washington and of his faithful and devoted wife Margaret Arnold of Pennsylvania and of their loved daughter Sophia Matilda Phipps"

His obituary in Gentleman's Magazine of June 1801 consisted of the following:
"At his house in Gloucester Place, Brigadier General Arnold. His remains were interred, on the 21st, at Brompton. Seven mourning coaches and four state carriages formed the cavalcade."

For over two hundred years, Arnold's place of burial had been forgotten, until 1931, when John George Taylor"s book "Some New Light on the Later Life and Last Resting Place of Benedict Arnold and of His wife Margaret Shippen" was published, telling the story of how that author discovered the location.

See this website for good photos of the memorials at the church: http://www.changesinlongitude.com/burial-location-of-benedict-arnold-in-london/
Read More 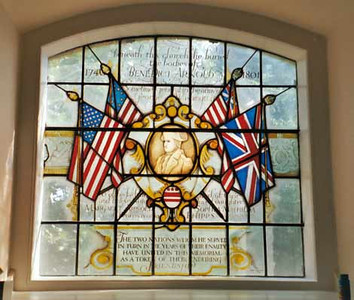 From Find-a-Grave: Another modern addition, a commemorative stained-glass window.
This $1600 window was donated in 1976 by Mr. Vincent Lindner of New Jersey, USA. He formed the Benedict Arnold Society to restore Arnold's reputation. See page 2 of this link for more detail on Mr. Lindner: http://arnoldsmarch.com/newsletters/Issue%2039.pdf